Sat Nav:   52.236, -6.837
*These co-ordinates direct you to the front entrance of the Abbey to avoid unsurfaced lanes. Continue to the trailhead near the Abbey to start your walk.

A Cistercian abbey, founded c.1200 by William, the Earl Marshall, and named after Tintern in Wales. The remains consist of nave, chancel, tower, chapel and cloister. It was partly converted into living quarters after 1541, and further adapted over the centuries. The Abbey was occupied by the Colclough family from the 16th Century until the 1960s. 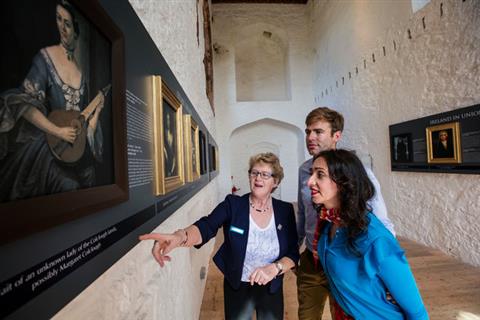 A haven for wildlife, all trails in the Tintern Demense will enable you to not only enjoy breathtaking views of Tintern Abbey but will also bring you on a voyage of discovery through woodlands where natures bounty is as its best.  The beautiful walled garden is a gem and not to be missed is the old estate village of Saltmills.   Pleasant and serene landscapes with drifts of ferns, bluebells and wild garlic in the Spring, where else would you want to be?

Back to the Norman Way

From the R733, take the L4041 and, after 1km, turn right at the entrance to Tintern Abbey. Continue to Trailhead at the abbey. Alternative trailhead located in Saltmills village.

Back to the Heritage Trail
Manage Cookie Consent
We use cookies to optimize our website and our service.
Manage options Manage services Manage vendors Read more about these purposes
View preferences
{title} {title} {title}